Cold Spray uses high-pressure, high-flow rate gas, heated to relatively low temperatures (RT°-500°C). By using a supersonic converging/diverging nozzle, powder entrained in the high speed gas jet is accelerated to velocities in excess of 600 ms-1. As the particles hit the target surface they impact under large plastic deformations, consolidating to produce localised forge bonding, depositing coatings at up to 100 gmin-1.

The cold spray system developed at the University of Cambridge; uses in house nozzle designs to allow the deposition of Cold Spray process schematic

One of main areas of research in the Cold Spray project was nozzle design and bow shock phenomena; and in particular, how they affect deposition performance. In terms of nozzle design, CFD has been used extensively to help construct nozzles of different profile and length, specifically for the process which are designed to operate under specific operation conditions and in some cases, control the distribution of powder within the gas stream.

In order to assess their gas-dynamic performance, as well as to validate the CFD, Schlieren imaging and Particle Image Velocimetry (PIV) have been used to investigate gas flow and particle velocities respectively. 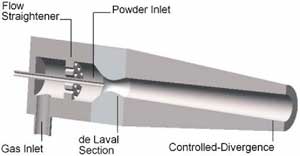 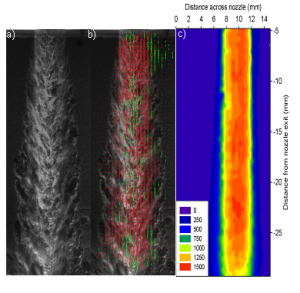 Snapshot of powder stream and snapshot overlaid with velocity vectors

The use of specific nozzle designs allows the powder stream to be confined to the centerline of the nozzle, producing tracks which are < 1 mm in width.

It has also been shown that the bow shock – formed at the impingement zone – has a negative influence on DE as a result of its effect on particle velocity; the high-density stagnation bubble can lead to particle deceleration. Since the strength of the bow shock is strongly dependent on standoff distance (SoD), as a result of the falling gas velocity outside the nozzle, three distinct SoD regions have been identified that affect deposition performance:

Aluminium, copper, titanium, tin and a variety of composite coatings have been deposited onto a variety of substrates of metal, ceramic, glass, CFRP and certain polymers.

Coating thickness can range from a single layer of powder through to millimeters per pass depending on traverse rate and powder feedrate.

Tri-material sandwich built up from aluminium, copper and titanium.